If you would like to receive our regular Newsletter via email, please fill out the form below and click on the Submit button.  You may also use this form to unsubscribe from our newsletter emailing if you wish.  Thank you.

The musicians of the Ontario Chaffey Community Show Band and Al and Jennifer Boling are proud to present "The Wonderful World of Disney" on Monday May 16, 2022 at 7:30 p.m. at the Merton Hill Auditorium located at the southwest corner N. Euclid Ave. and Fifth Street on the campus of Chaffey High School in Ontario.  Look for the white bell tower.  The Woodwind Celebration Ensemble will present a pre-concert recital in the auditorium lobby at 7:00 p.m.  The concert will be narrated by Al Boling, retired City Manager for the City of Ontario and Sue Ovitt, member of the Chaffey Board of Trustees.  The performance begins at 7:30 p.m. and is FREE to the public.

The May concert features a collection of memorable hits from Walt Disney cartoons, television programs, and films.  Featured soloists include Show Band trombonist Stephen Cavaretta and musician/dancer Kathy Soderlund.  Stephen is an outstanding musician and holds down the Show Band trombone section.  He will perform "Stay Awake" from the film Mary Poppins.  Kathy is an extremely talented and creative individual.  She plays the alto saxophone and also is a gifted dancer.  She has entertained Show Band audiences for many years with her performances.  She will be featured in "A Whole New World" from Aladdin and a medley of themes from the Zorro films.  Kathy has created the choreography for both selections.

The Show Band's special guest artist is young and talented vocalist Charlie Nolte.  Charlie was raised in Pomona, California, though he spent the last year completing his first year of college at BYU Idaho in Rexburg.  Charlie has sung from an extremely young age and spent his childhood honing his craft alongside both his talented mother Aimee, who has performed with the Ontario Show Band several times, as well as studying voice with top-notch vocal coach Sara Leib.  Charlie has appeared on stage and screen since the age of five, appearing in national commercials for Suave and Mercedes Benz.  He has played the role of Pinocchio in Shrek, The Musical and performed with the Bonita High School Chamber Singers.  In the Fall, Charlie plans to attend Fullerton College and study music and then continue on to the Berklee School of Music to finish up his vocal performance degree.  He's thrilled to be singing some of his very favorite Disney songs with the Show Band.  Charlie will be featured on "Evermore" from Beauty and the Beast, "When She Loved Me" from Toy Story 2, and "Tonight" from West Side Story.

The outstanding musicians of the Show Band will open the performance with a medley of memorable hits entitled "Disney's Magic Kingdom" that include "When You Wish Upon a Star," "Someday My Prince Will Come," "Mickey Mouse March," "Heigh-Ho," and "Zip-A-Dee-Doo-Dah."  The concert's finale is entitled "Disneyland Adventure" and is a collection of Disney melodies that Disneyland visitors have been hearing for many years.  The medley includes "It's a Small World," "Ballad of Davy Crockett," "Chim Chim Cheree," "The One and Only Genuine Original Family Band," "Beauty and the Beast," "Bibbidi Bobbidi Boo," "Whistle While You Work," "Yo-Ho-Ho" and "Supercalifragillisticexppialidocious." 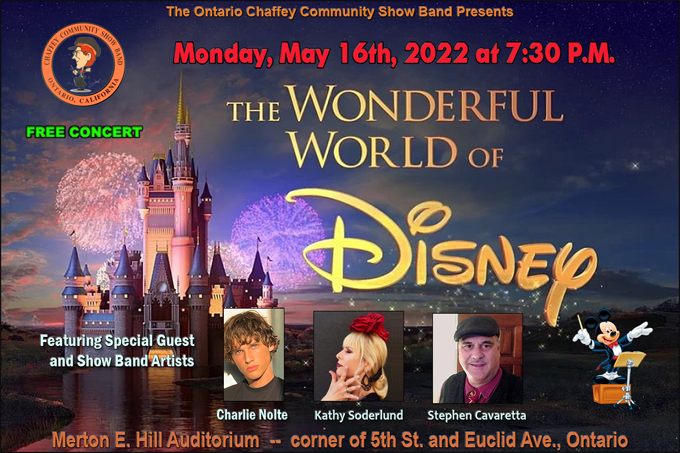 Join us for a great night of music and don't forget to invite your family and friends!  You can also support the Show Band by visiting and feeding our Hungry Tuba located in the lobby of the auditorium.  This concert will be broadcast on local Ontario cable Channel 3.  Check your cable listings for the date and time.  For additional information regarding these performances or the rest of Show Band's upcoming concert season, please check our website at www.showband.net and follow the Show Band on Facebook, Twitter, YouTube, and Instagram.

The Show Band will also perform in the Memorial Day Remembrance Program at Bellevue Memorial Park at 10:00 a.m. on Monday May 30, 2022.  The Show Band will join members of the Ontario Fire Department, Ontario Police Department, and local veterans from each branch of the services in paying tribute to military personnel who have died while serving in the United States armed forces.  The program will be narrated by former City of Ontario Mayor Gary Ovitt.  The guest vocalist will be Mr. Brian Detwiler and the keynote address will be given by Dr. Chris Hollister, Assistant Superintendent in the Chaffey Joint Union High School District.  We look forward to seeing you there.

The community can help support the Ontario Chaffey Community Show Band by becoming a patron of The Friends of the Ontario Chaffey Community Show Band Concert Society for $25.  Become a Bronze Baton donor for $50-$100; Steel Baton $150-$200; Silver Baton $250; Gold Baton $500; Platinum Baton $1,000 and Diamond Baton $2,500.  Individuals or businesses may also become a Show Sponsor for $1,000.  For more information on sponsoring a show, contact director Dr. Gabe Petrocelli at gabe@showband.net.  All Donor names will be included on every program and our website for the entire concert season.  Baton and Show Sponsors will also receive complementary DVDs of each performance.  The Friends of the Ontario Chaffey Community Show Band is a registered charity under Internal Revenue Code Section 501 C (3); EIN # 46-1422958.  Checks may be made out to: Friends of the OCCSB, P/O Box 1512, Ontario, CA 91762.

The Ontario Chaffey Community Show Band was founded in 1985 by R. Jack Mercer and is now under the direction of Dr. Gabe Petrocelli with assistant directors David Schaafsma and Pat Arnold.  Band members represent at least two dozen communities throughout Southern California.  Adult and student musicians are invited to participate.  No auditions!  Rehearsals are held on Monday evenings from 7 to 9:00 p.m. at the Chaffey High School Jack Mercer Band Room.  The band performs monthly concerts in the Merton Hill Auditorium and at other venues throughout the community.  All performances are free to the public.