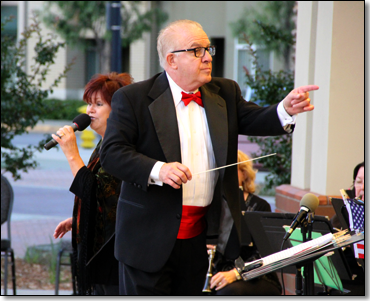 In 2004, Dr. Petrocelli composed the concert march "The Bandmaster" for the commemoration ceremony to honor Jack Mercer and the naming of Mercer Music Hall on the campus of Chaffey High School.  In 2006, Dr. Petrocelli's "St. Mark's Passion" for Chorus and Organ was premiered at the Assisi Musical Festival in Assisi, Italy.  In 2010, he composed a work entitled "Centennial" to commemorate the 100-Year Anniversary of the Chaffey Joint Union High School District.  Dr. Petrocelli has written nearly 150 arrangements for the Ontario Chaffey Community Show Band and numerous others for high school bands and orchestras throughout Southern California.  In 2011, he composed the film score for a documentary movie entitled "Mayberry Days."  He has composed music for NBC-TV and written musical arrangements for Hanson Publications.

Beginning the 2013-2014 concert season, Dr. Petrocelli stepped up to the podium as the new director of the Ontario Chaffey Community Show Band, taking over from the legendary founder and director Maestro Jack Mercer.